Tumalo Mountain is Bend's most accessible backcountry terrain and provides accessible skiing and snowshoeing opportunities for many users in our area. The proposed Recreation Zone creates a safe, quiet non-motorized area for non-motorized winter backcountry users. The zone is outlined in red on the map below. You can also download this map. Below the map you'll find details on the proposal. 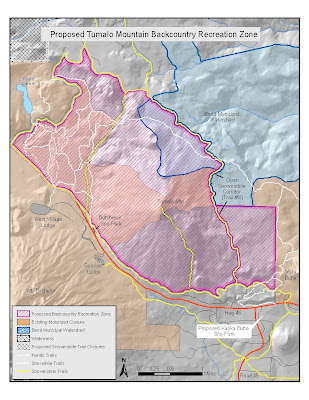 Some winter recreationists (snowmobilers, dog sledders, and skate skiers for example) require marked trail systems, informational kiosks, ready-made maps, warming huts, groomed trails, and lodges. Backcountry skiers, snowboarders, and snowshoers however, neither require, nor desire, such amenities. Instead, they seek the naturalness, solitude, challenge and inspiration that is an integral part of the unaltered and non-motorized landscape.

Although the Three Sisters Wilderness can provide those values, the difficulty in traveling the distance limits wintertime access. Thus, as the Forest Service works to improve recreation opportunities for user groups requiring developed sites and trails in the Century Drive corridor, it is appropriate to also improve opportunities for those desiring undeveloped terrain.

Only by addressing current and projected user conflict can the Forest Service legally pursue an increase in snowmobile parking capacity. It is suggested the following action be implemented in conjunction with the forthcoming Kapka Butte Snopark proposal:

Create a defined and defensible zone of undeveloped non-motorized recreation encompassing Tumalo Mountain. By utilizing Snowmobile Trail 5, Trail 6 and Trail 8 as a corridor and boundary, and decommissioning Trail 7, a contiguous non-motorized zone is established. The management issues associated with the existing checkerboard pattern of motorized/non-motorized areas would be eliminated. The miles of signage (requiring an inordinate amount of maintenance) that currently weaves through the trees, ridges, and meadows would no longer be necessary. Instead, the obvious boundary of the snowmobile trails could be easily posted, maintained, and enforced. Forest Service manpower that is now applied towards posting the Dutchman corridor, the Bend Watershed, and Tumalo Mountain could then be redirected towards managing the influx of machines that the high- country will experience with the expansion of snowmobile parking capacity. Support for a new Snopark of equal or lesser size (measured in square footage) to the current Wanoga Snopark would be dependent upon full and effective mitigating action.

Due to the proposed location of Kapka, snowmobile access to the high country would be a short direct route up Trail 6. Trail 5 would provide direct access to the alternate high country route provided by Trail 8. The value of Trail 7 is greatly diminished with the building of Kapka, for at that time Dutchman Snopark is scheduled to become a non-motorized Snopark.

For the sake of public discussion this is a proposal to create the Tumalo Backcountry Recreation Zone. In reality, it is a simple byproduct of necessary actions required to manage an increase in snowmobile usage in the Century Drive corridor.